The Pirates! In an Adventure with Scientists [Blu-ray] [2012] 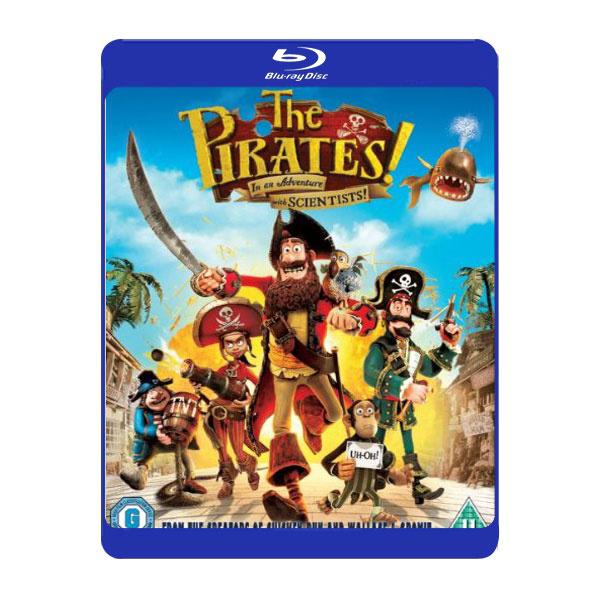 The wizards of stop-motion mirth at Britain's Aardman Animations have significantly stepped up their art, craft, and storytelling style in The Pirates! In an Adventure with Scientists. Commonly known as Claymation (though the elaborately rendered miniature sets and figures are constructed with high-tech Plasticine), the process involves painstaking manipulation of physical forms to create the smooth movements and clever nuance of character that made Aardman famous with their iconic Wallace & Gromit shorts and the features Chicken Run and Flushed Away. The source material is a series of books by Gideon Defoe that are of the for-kids-and-grownups-alike variety, which means The Pirates! is perfect family fare that has plenty of intelligent asides to counterbalance the wacky and slapstick shenanigans. The story is set on the tropical high seas and in the heart of Victorian London, where Queen Victoria herself (voiced by Imelda Staunton) has a starring role. The movie takes giddy pleasure in making her out to be a nefarious no-goodnik who has plenty of secrets, though none of the lacy unmentionable variety. The real star is the Pirate Captain (a husky-sounding Hugh Grant) who's more interested in procuring cured pork for his ship's regular "Ham Nite" feasts than plundering for valuable booty. This becomes kind of a problem when he enters the Pirate of the Year contest and finds himself up against the stiff competition of Black Bellamy (Jeremy Piven), Cutlass Liz (Salma Hayek), and Peg Leg Hastings (Lenny Henry), all of whom have oodles of jewels and doubloons to back up their bids.

But the Pirate Captain has a bird in the hand that may win him the prize yet. His ship's mascot Polly is not a parrot as he and the crew believe, but rather the world's only surviving dodo, so identified by Charles Darwin (David Tennant) when his famous ship the Beagle is attacked by the pirates. Darwin assures the captain that Polly is worthy of winning him Scientist of the Year and untold riches. So it's off to London and into the malevolent schemes of both Darwin and Victoria. A madcap series of events leads to an air-sea showdown of breathtaking proportions that blends meticulous stop-motion technique with top-flight CG effects. Throughout the movie the attention to detail is sensational, even in the most throwaway gags. An underlying cleverness is woven into every precisely composed scene, adding to the overall sense of comic timing and the meticulous elements of story that imbue every movement. The laughs come fast and furious, especially in several elaborate set pieces that include a wild bathtub ride down a seemingly endless staircase, and the bravura finale that swoops and soars through, over, and around Victoria's behemoth of a steampunk sea vessel. The speed of the jokes and the sophisticated action never overshadow the wildly amusing story and dotingly-thought-out character details. Among the lovable and eloquently voiced ensemble pirate crew are the Pirate with a Scarf (Martin Freeman), the Albino Pirate (Anton Yelchin), the Pirate with Gout (Brendan Gleeson), the Surprisingly Curvaceous Pirate (Ashley Jensen), and the Pirate Who Likes Sunsets and Kittens (Al Roker). But more than anyone it's co-directors Peter Lord and Jeff Newitt who are primarily responsible for deftly keeping The Pirates! afloat in what could easily become another memorable Aardman franchise.